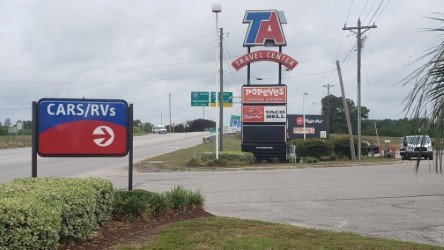 The TA Travel Center truck stop at 3014 Paxville Highway near Interstate 95 is seen in Manning. George Kosinski, executive director of the Clarendon County Development Board, said he thinks one reason for the recent growth at the county’s industrial park has been its proximity to I-95.
KAREEM WILSON / THE SUMTER ITEM
Posted Friday, June 4, 2021 6:00 am
CLARENDON COUNTY INDUSTRIAL PARK BY THE NUMBERS
BY KAREEM WILSON
kareem@theitem.com

11 – Companies have moved to Clarendon County Industrial Park since 1980s

The current state of the economic opportunity in Clarendon County could be summed up in two words: strong growth.

Clarendon County is celebrating its recent success in seeing a surge of economic development in part from the addition of new businesses.

Several new companies have made their way into the rural county, specifically at the Clarendon County Industrial Park on Jo Rogers Jr. Boulevard in Manning, with these companies investing more than $34.8 million and bringing more than 345 jobs.

The Clarendon County Economic Development team talked about the recent success in recognizing a boost in economic growth amid a challenging year because of the coronavirus pandemic.

“This is probably the most busiest we’ve been,” said George Kosinski, executive director of the Clarendon County Development Board. “Clarendon County has always been successful at recruiting manufacturing projects, and they’ve got really successful this year.”

The park, which is less than a mile from Interstate 95, houses a dozen companies. The boom there started with last year’s Loctek, a manufacturer of ergonomic solution products, establishing operations in August 2020. It was soon followed by Westinghouse Electric Co. in December 2020. This year, announcements have come from On Time Distribution in March, Palmetto Yacht Management in April and F. Hunt Enterprise last month.

“We’ve had really good success building [speculative] buildings and, in turn, enticing companies to come and locate in that park,” Kosinski said.

F. Hunt was the county’s 11th in the industrial park dating back to the 1980s, he said. The industrial park has been a staple in the county and, according to Kosinski, this is the most businesses he has seen come to the county in nearly 15 years. To get all these companies to their area, the county’s economic development team worked with other officials in the City of Manning, Clarendon County Council and others to make all these “pieces” fit together.

“Everybody’s on board. They believe in what we’re trying to do, and they’re very supportive of their effort,” he said.

“From a trucking standpoint … all of that helps them and continues to be able to move the product over there,” he said. “I think based on the location of their customers, whether it be in the Midwest or on the East Coast, they can easily get to them via truck within a day’s travel time.”

He said these companies can use the Port of Charleston to bring in containers of products from overseas then repackage and distribute products along the East Coast. He also attributed the growth of Charleston’s businesses reaching over to their and other counties, including Dorchester and Orangeburg. These new companies also lead to job availability with more people moving into the county seeking new opportunities.

“These companies aren’t going to be successful unless they can find the workers to work in their facilities to move product in and out. I think all of those factors have led to the recent success we’ve had,” he said

With these new businesses coming and new people filling the jobs, there is increased possibility of more leisure and restaurants opening in the city and county.

For now, most of these companies are gearing up for opening. Westinghouse is on track for a mid- to late-summer opening, Loctek will open later this summer, and Palmetto Yacht Management will be operational in May 2022, Kosinski said. He said he thinks Clarendon County’s future is bright.

“There’s a lot of construction activity going on in the industrial park right now,” he said. “We haven’t really slowed down. We still have a lot of projects that are in the funnel or early stages and some that are much further along.”